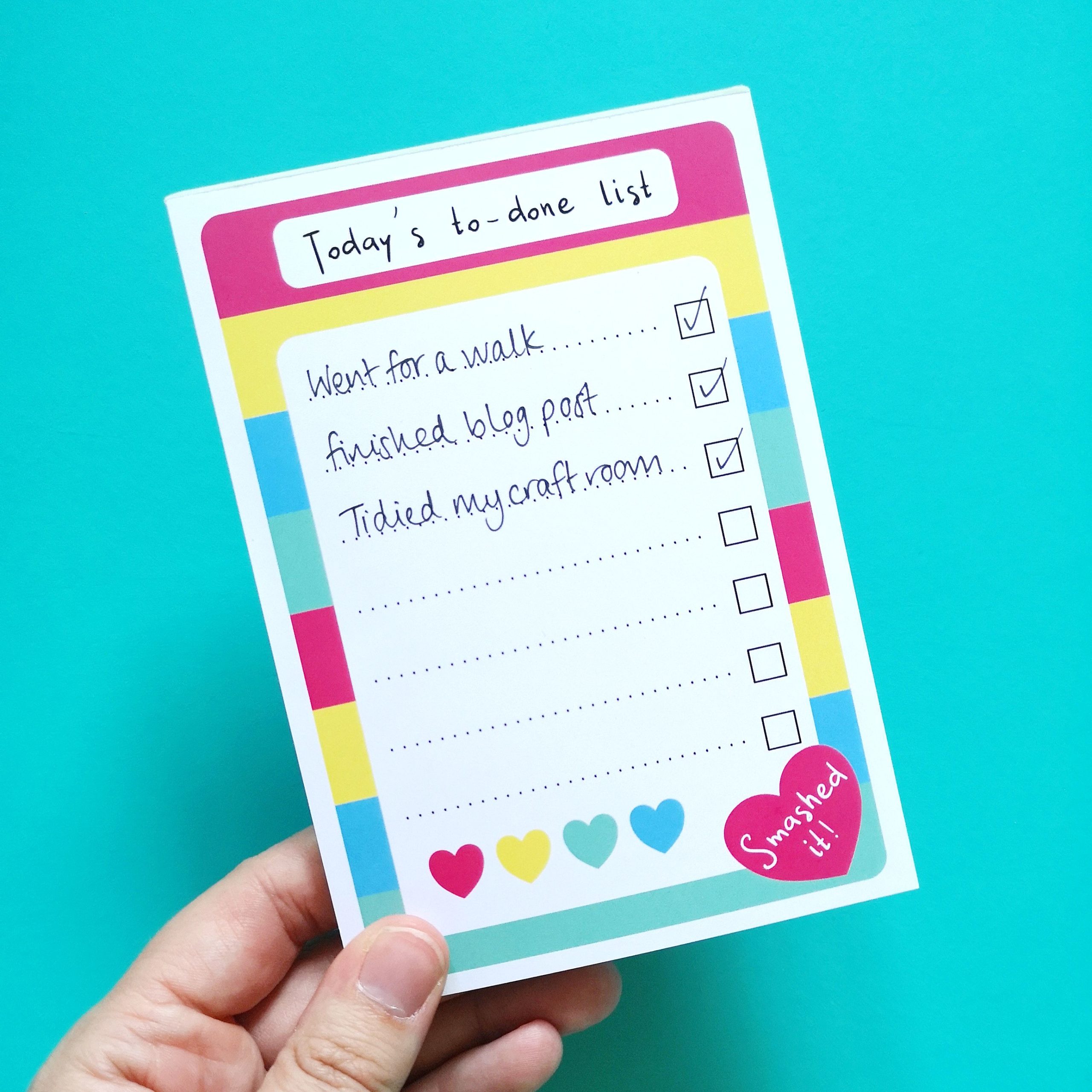 I discovered the magic of the to-done list a while back, but throughout life in lockdown it has helped me even more. I’d like to share it with you today, as it will hopefully be something that helps you too. The idea is simple: instead of writing a list of the things you have to do, you make a list of the things that you have done. During difficult or stressful times, this can be extremely helpful because instead of focusing on all of the things that are still waiting to be done, you’re focussing on all that you have achieved. When the days all start to feel the same in lockdown, it’s a really positive thing to sit at the end of the day and think about all that you’ve done, not matter how big or small.

I have always been the kind of person who has at least three different to-do lists on the go, and that’s not counting the mental lists that I make of stuff that I need to or would like to do at some point! Writing down a list of tasks can be helpful, especially when you’re juggling a lot of things, but when our second child was born in March I began to feel a little overwhelmed by my to-do lists. I just kept thinking of more and more things that “needed” to be done, and wondering how on earth we would ever tick anything off! I have always just added extra things that I have completed to the bottom of my to-do list anyway, so I decided to try making a to-done list instead.

A to-done list is a list of things that you have achieved in a day or a week (or longer if you prefer, but I like to keep it short). Instead of writing down everything that you “should” do, you make a list of things as you have done them. For example, you could write down tasks that you have completed, such as ‘cleaned the bathroom’ or ‘posted my friend’s birthday present’. But it could also be things that seem like much smaller achievements ordinarily, but are actually huge things if you’re going through a difficult patch. Things like ‘cooked myself a nice lunch’, ‘went for a walk in the sunshine’ or even ‘got dressed today’. It doesn’t matter how big or small they are – seeing what you have achieved on a to-done list is brilliant, and it has had a really positive impact on my mental health.

Sometimes I even sit down at the end of the day and write my to-done list, rather than writing it as I go along. It’s lovely to give myself time and space to sit and think about the day and what I have achieved, and more often than not I am surprised by everything that I have managed to fit in – yay! Don’t get me wrong, the to-do lists still exist (I am so forgetful that I need to write things down!), but the magic of the to-done list has helped me to view tasks more positively and put my mental health at the heart of that. 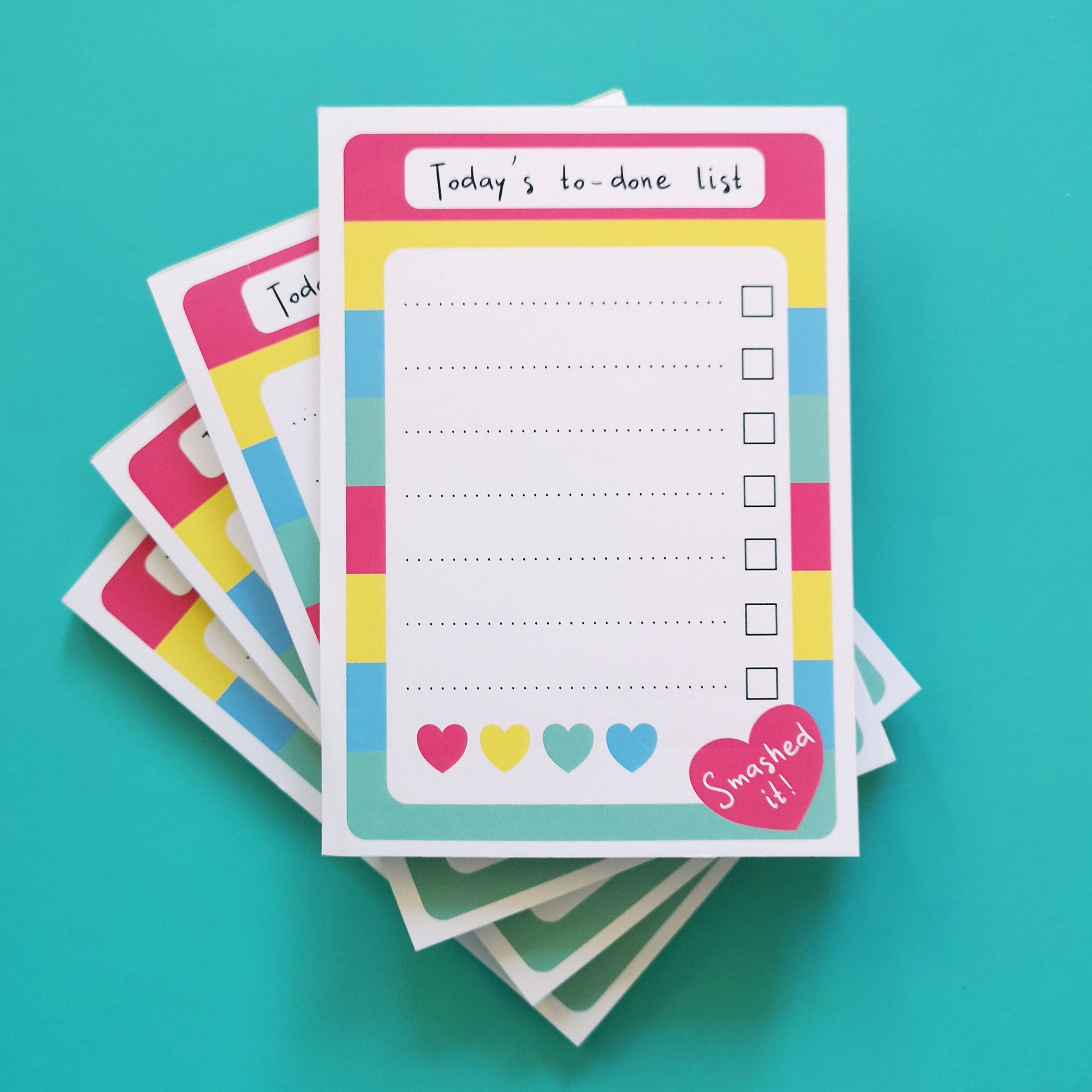 How will this help me during the pandemic?

I’ve been writing to-done lists for a while now, and what I’ve really noticed is that its’s really helpful during times of uncertainty. I’ve felt a bit lost at various points since the start of the pandemic, but writing these lists has helped me to see that in spite of everything that’s going on, I have managed to keep going. I have achieved things on the toughest days, even when it has felt like I haven’t.

Once you start writing the lists, you’re able to see a bit more of the bigger picture too. As I said in the article above, some days you have one ore two things on the list and others it’s more like seven – but any number is absolutely fine. This bigger picture of achieving things over a week or a month has been helpful to me both in lockdown and during the pandemic more generally.

You could write your lists on a notepad, or in a notebook if you prefer. I designed these notepads back in 2019 and have only a few more left (they won’t be restocked once they have sold out). It really is good to look back on what you’ve achieved at the end of the week – particularly now as the days and weeks feel the same! I’m combining it with writing a little gratitude journal this year, and the combination feels very positive. I’m trying not to worry about missing days here and there either – at the end of the day, we can only do what we can right now. Sending you huge virtual hugs! Let me know if you give the to-done list a try and what you think about it 😊

Get creative with some more projects from my blog!

Make yourself a little treat:

Treat your embroidery projects to some thread conditioner: