Last week we had a pre-birthday celebration for our lovely friend Hannah, and everyone brought something along to contribute to the meal. We were set the challenge of making a birthday cake – but what sort of cake do you make for the person who made you the most amazing wedding cake?! So we decided to go for a super-chocolatey cake, but found two recipes that we liked. Tom was in charge of cake making and went for a combination of the two recipes: the first was by Rachel Allen and the second was from The Cooking Ninja blog. I was in charge of the frosting, and this originally comes from a Mary Berry recipe that we also found on the BBC Food website. You’ll need to use a 21cm loose bottomed cake tin, lined on the bottom and buttered on the sides – best to get this ready before you start!

2. Melt the dark chocolate and the butter in a bowl over a pan of boiling water. Separate the eggs; beat the yolks together with the sugar and the cinnamon in a large bowl.

3. Beat the egg whites in another bowl, together with a pinch of salt, until you have stiff peaks.

4. Once the chocolate and butter have melted, add them to the yolks, sugar and cinnamon mixture, along with the ground and toasted flaked almonds. Mix well before folding in the egg whites.

5. Bake for around 45 minutes and then leave to cool in the tin.

7. Spoon the cream cheese into a bowl then gradually add the white chocolate mixture and stir until combined. Set aside to cool a little, until thick enough to ice.

8. Spread the icing over the top and sides of the cake. I sprinkled some white chocolate stars over the top to make it look extra special.

This is a really rich and indulgent cake – if you’ve got a sweet tooth like me then you’ll love it! Enjoy! 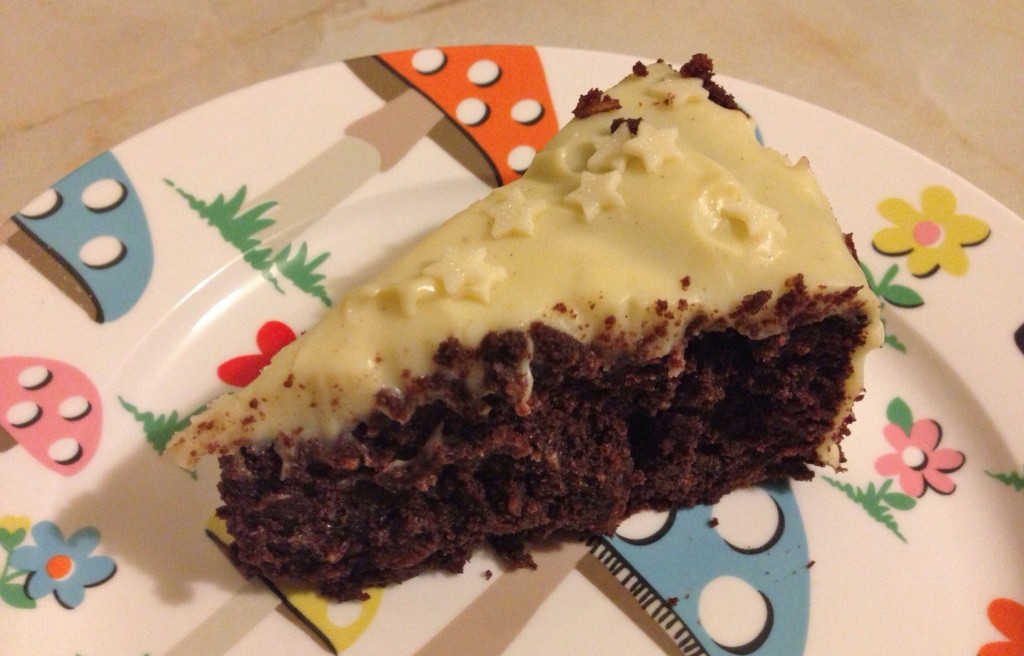