Over the past few weeks I’ve been making another rainbow baby quilt, this time for our dear friends Katrina and Adam, who are expecting their first baby next month – it has been a year of first babies for lots of our friends this year! I wanted to make a different quilt to my last one (read about that here) but still using rainbow colours. This is only the second quilt I’ve ever made, but I thought that triangles would look really cool. What I didn’t realise is that triangles are hard to sew – argh!

I decided to use a selection of plains in dark and light shades for the front, with some more of the amazing cat fabric on the back. All of that would be tied together with thin black and white striped binding: 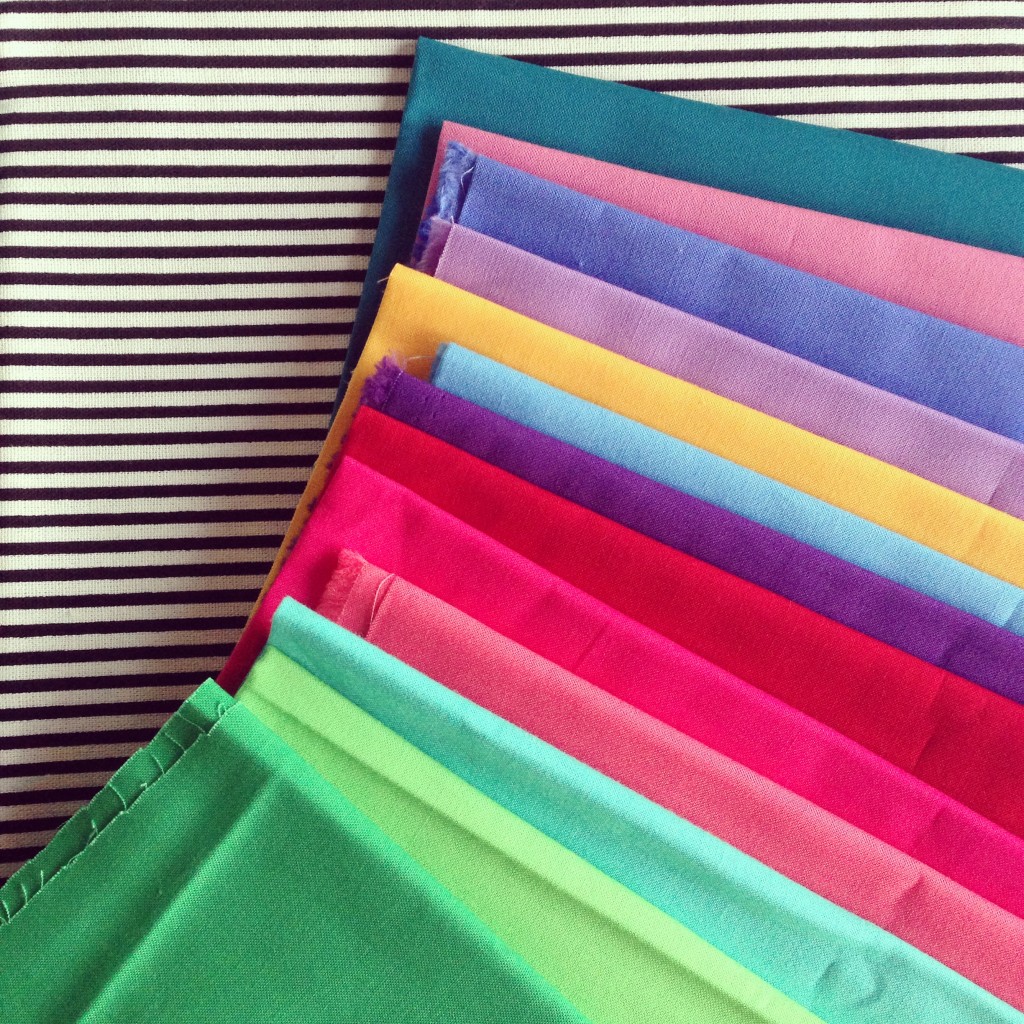 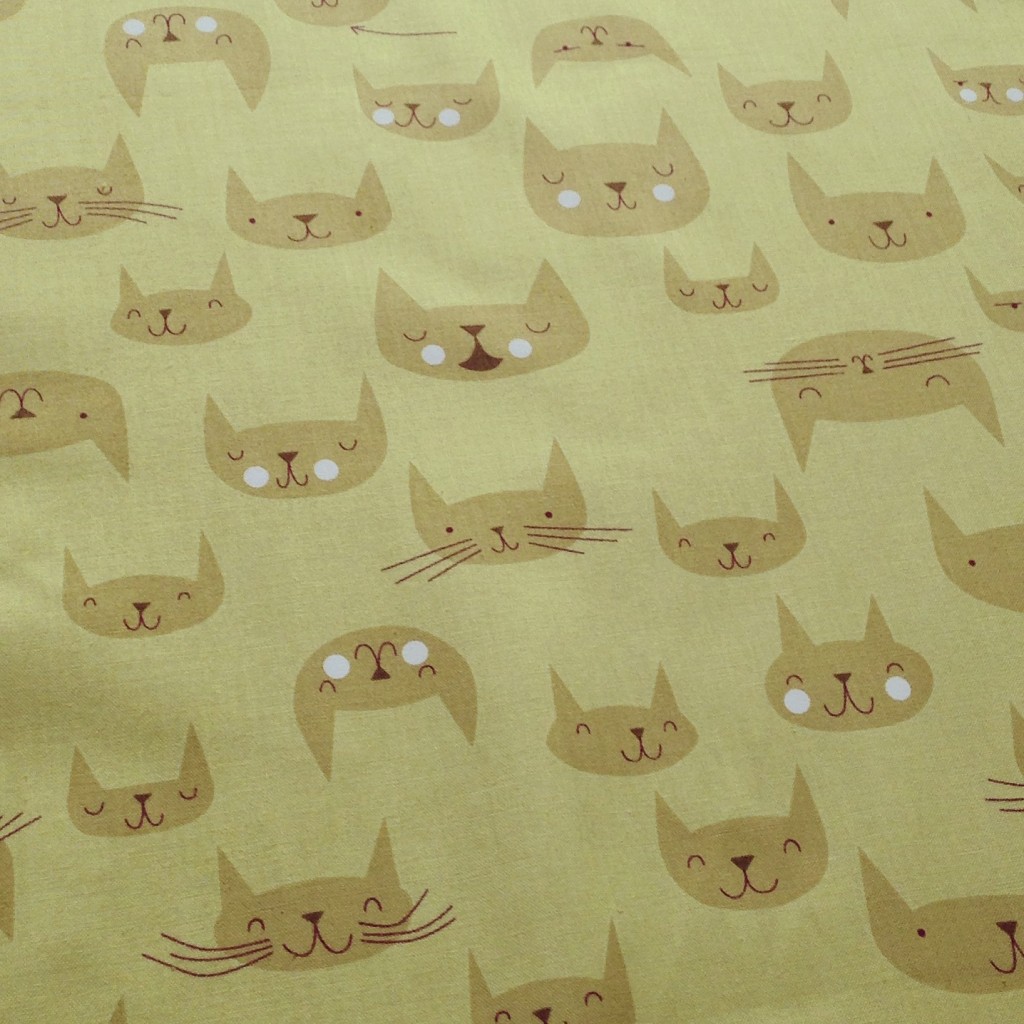 I decide to cut 6 inch squares, and worked out how many I needed of each shade. I love the colours so I did play around with them once I had cut them out, like this: 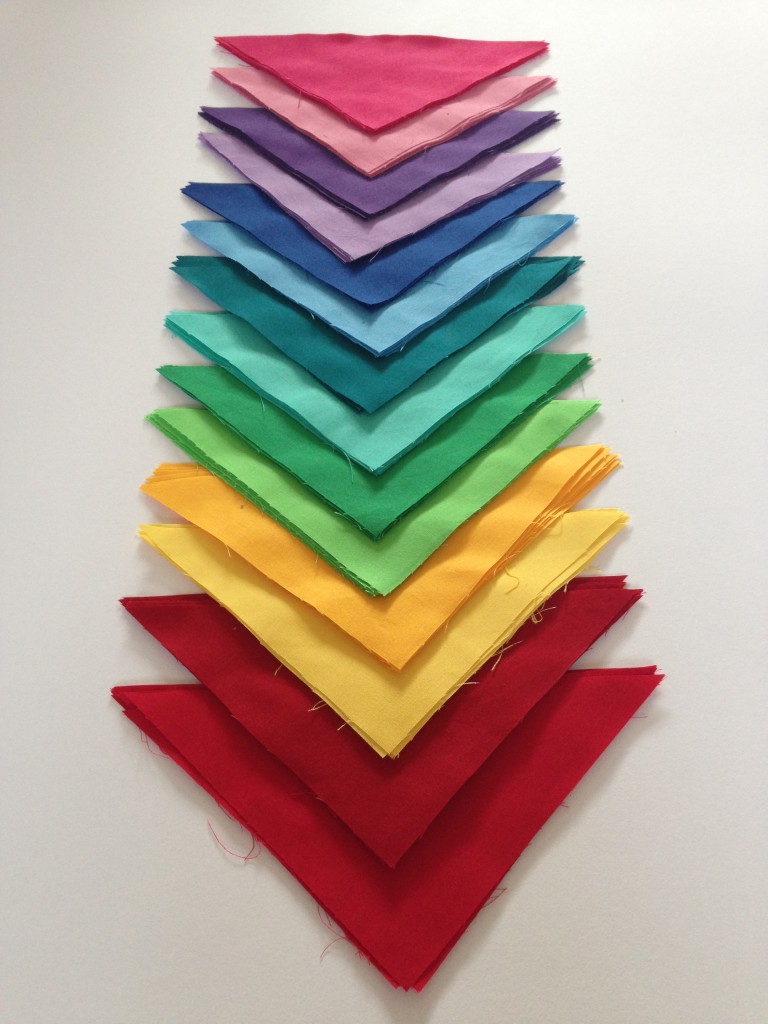 After I’d finished taking photos, I then laid out the pieces on the floor, playing around with placement a little. 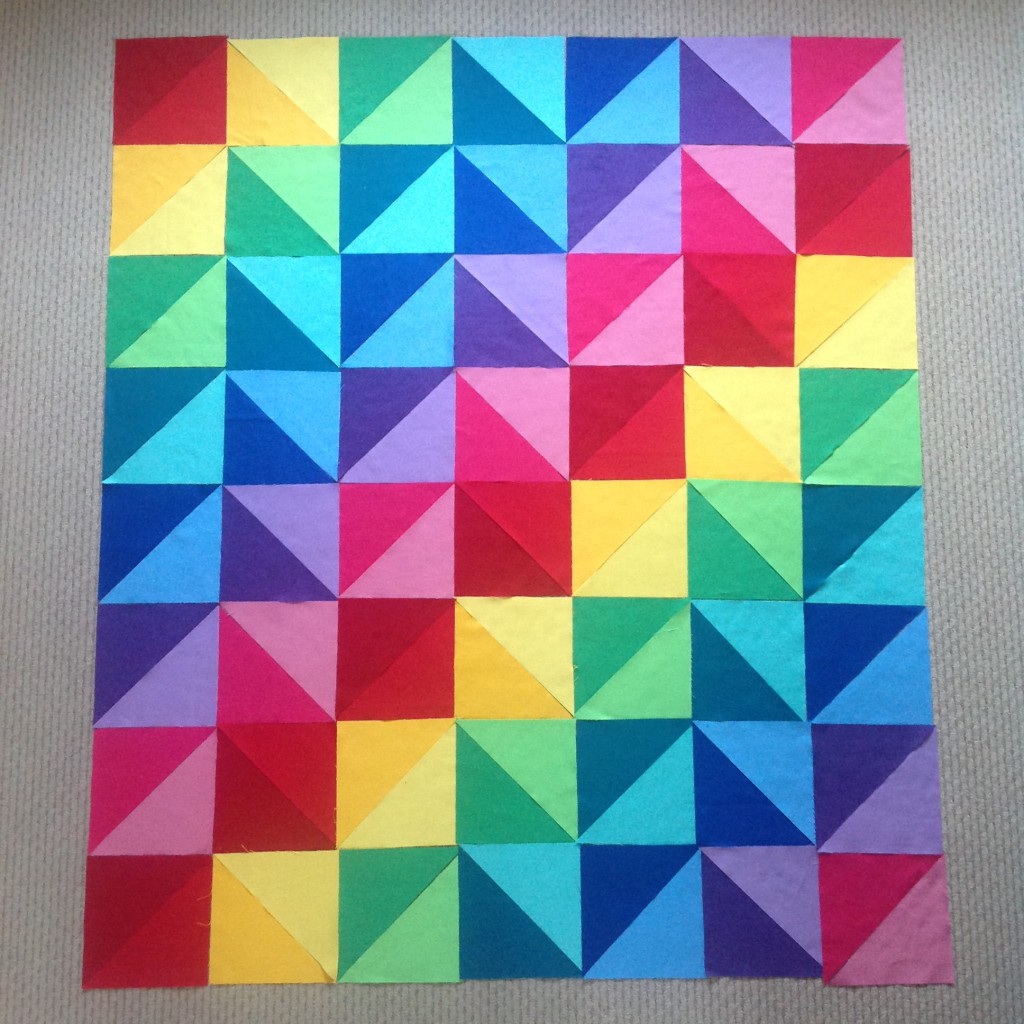 Now for the assembly! I was glad that I took a photo of the placement – to be honest, I would have just got so confused about without it. Although I did sew a couple the wrong way – there’s hardly ever a project I make without any unpicking! I started by sewing the triangles of the same colour together before pressing and trimming the corners. Our duet piano stool came in very handy at this point for keeping the squares in row order! 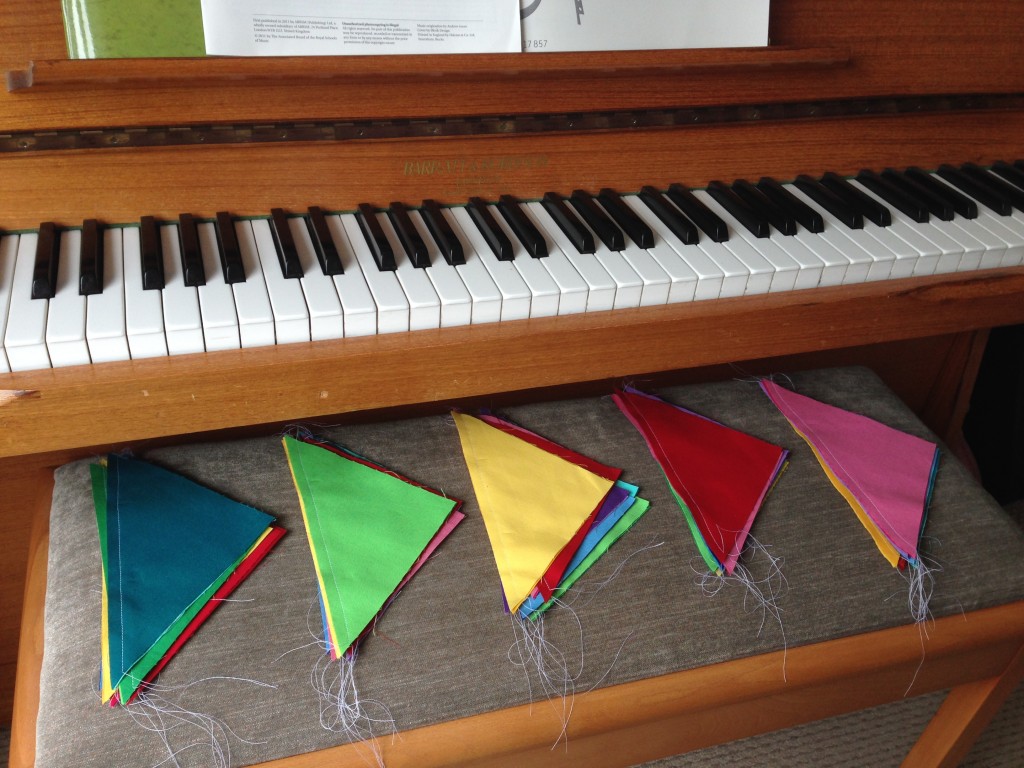 I then laid each one on the floor again before working out which squares to sew together. At first I (foolishly) went along a line from left to right, which was absolutely fine until I joined two rows together, and the rows had gone out of synch. So that’s where the unpicking came in… I realised that the easiest way was to work in two blocks of 4 squares and a block of 6, which could then be joined together. This is what I did on the first quilt I made, so why I felt the need to switch to a different, untested method I have no idea! At least I know now that my system works for me 🙂 I pressed the seams at each point of sewing blocks together, so that the whole thing would lay flat. 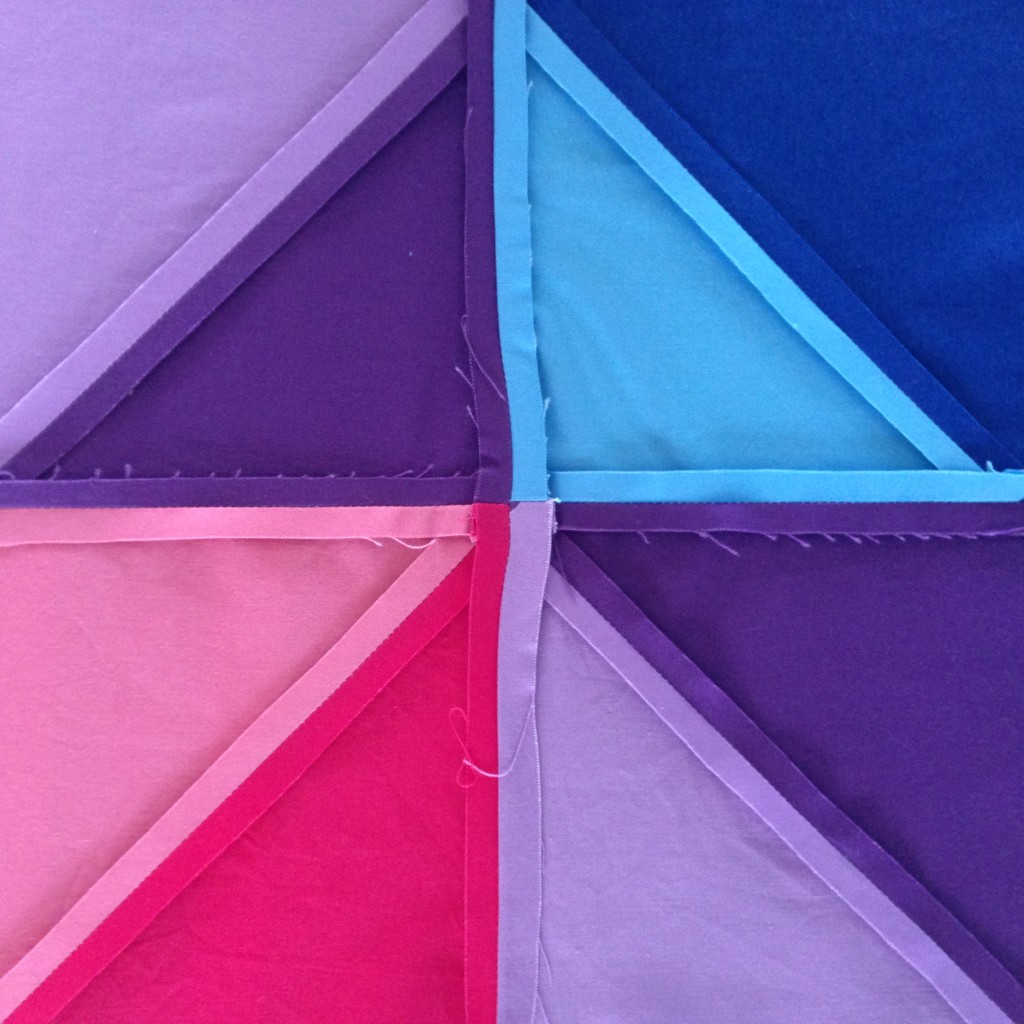 It took a long time to put the patchwork together, but I was so pleased with how it turned out! Yes, there are a few wonky bits, but you have to look closely to see them I think, and the overall effect is just what I wanted. The next step always makes me a bit nervous once I’m happy with the patchwork – I don’t want to make a mess with the quilting! 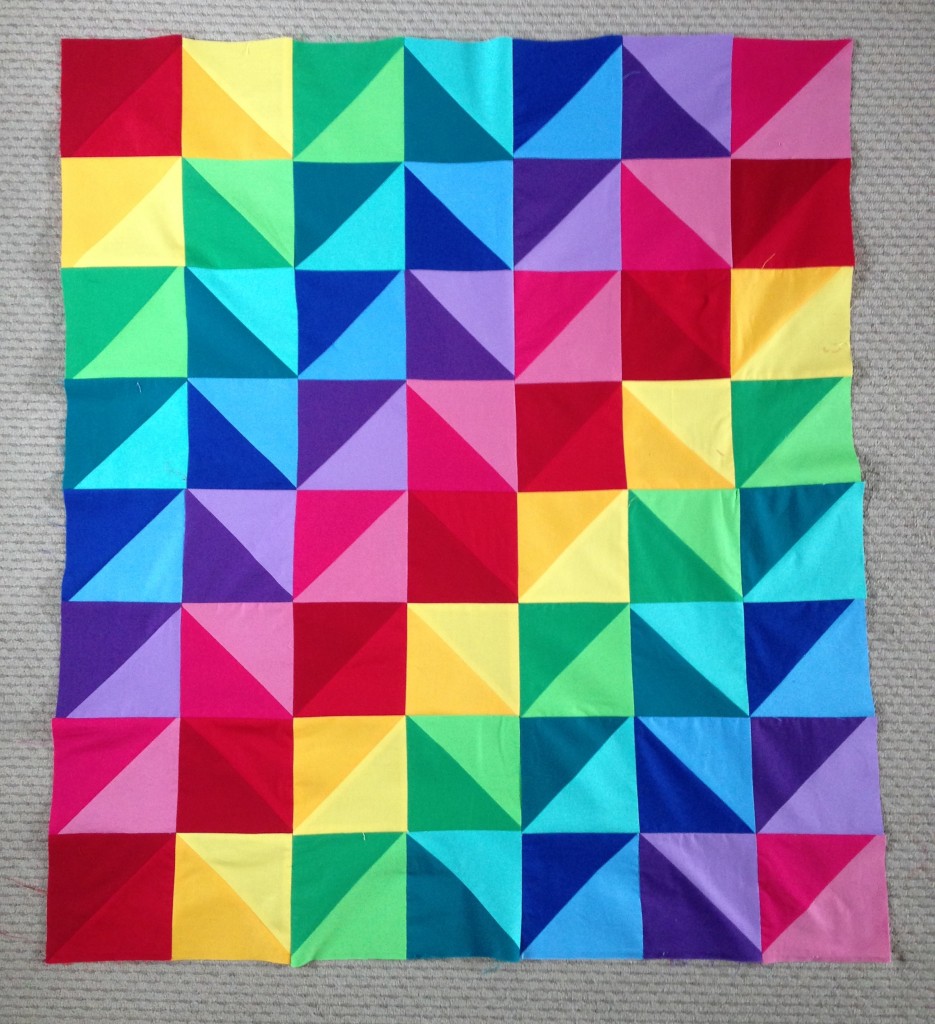 To quilt I did what I now know is called quilting ‘in the ditch’, which is basically where you sew along the seams. I just did this on the straight lines (i.e. not the diagonals) using white thread. On the odd occasion the lines weren’t quite matching, so I just had to stop to tie the ends and line it all up again! I’m not sure if you need to use a special foot for this really, but because it wasn’t too thick and I was just sewing straight lines, I just used my normal foot. 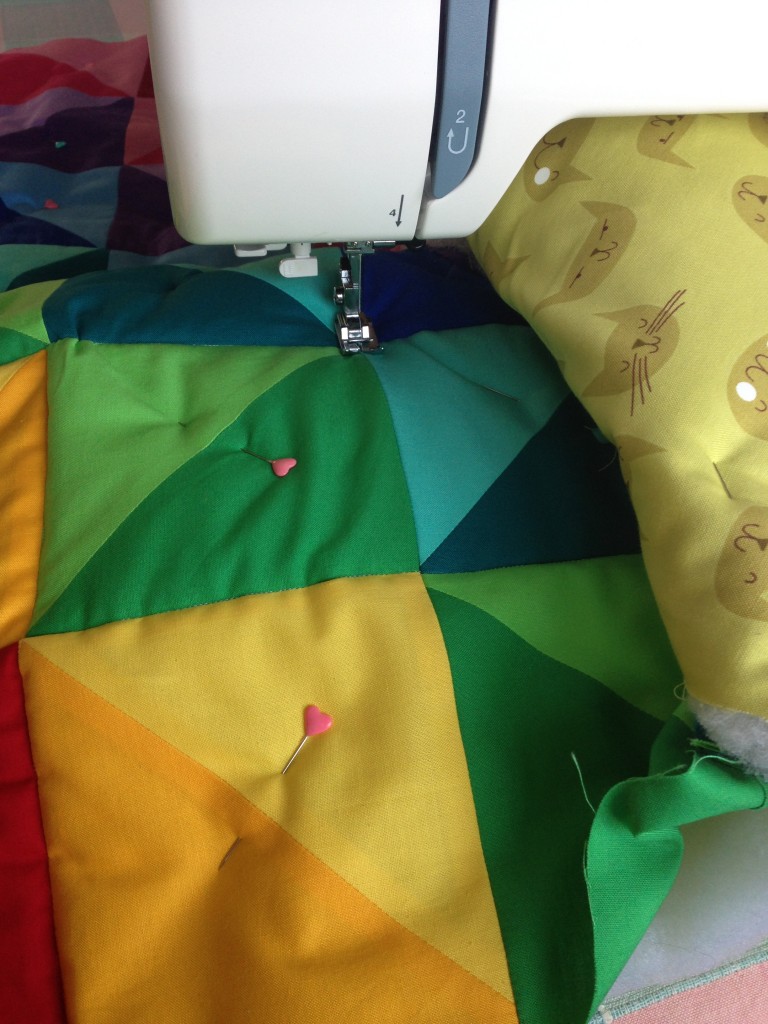 Thankfully, other than a few minor slips, I did ok! I only just had enough wadding and backing fabric here, and in one corner the backing had moved up a little whilst sewing, so I’d need to make sure that the binding would cover it. I made my own binding from this super black and white stripes fabric, which contrasts so well with the bright, bold colours. I cut 2 inch strips and then pressed back about half a centimetre on each side. I know I’m mixing up my imperial and metric here, but that’s how I roll! I machine stitched the binding to the front of the quilt and then hand stitched the back – this bit was done with the help of a few episodes of Murder, She Wrote which is a guilty pleasure of mine…don’t judge me! 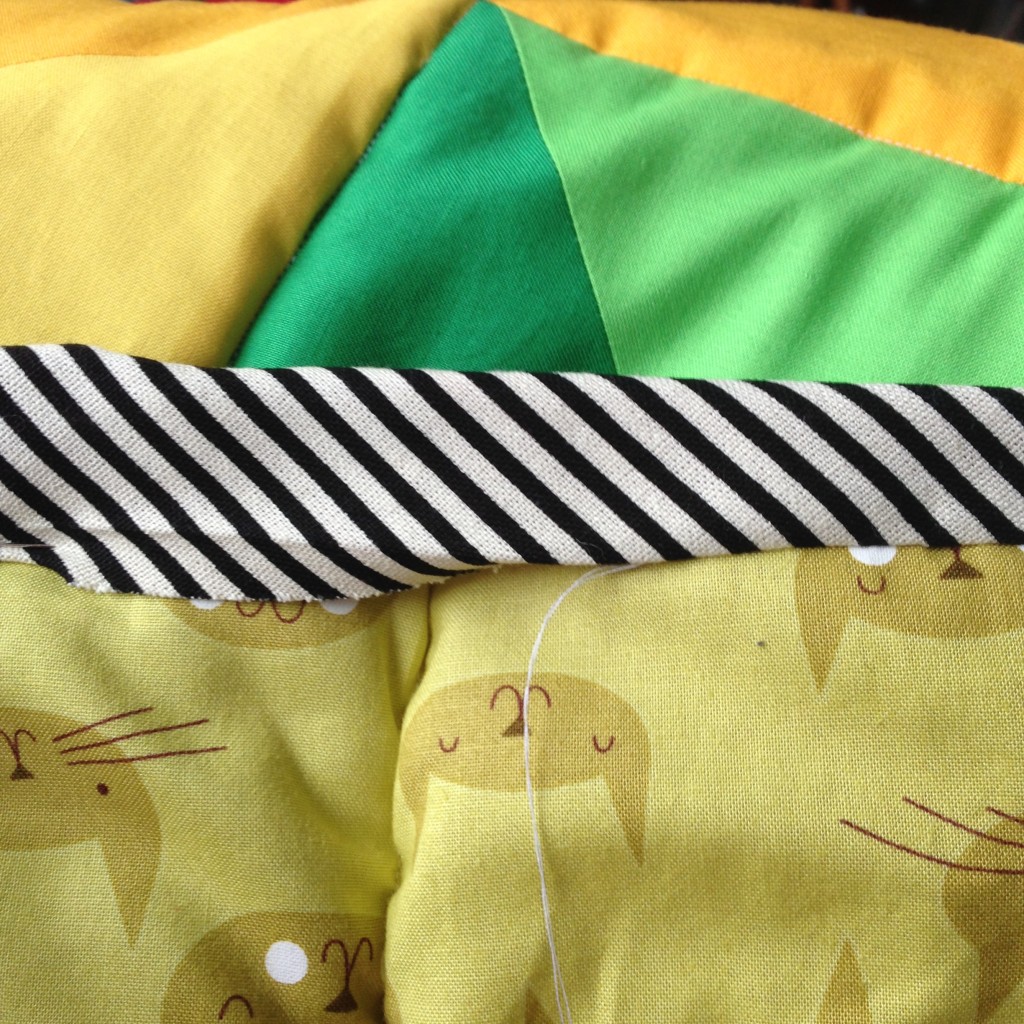 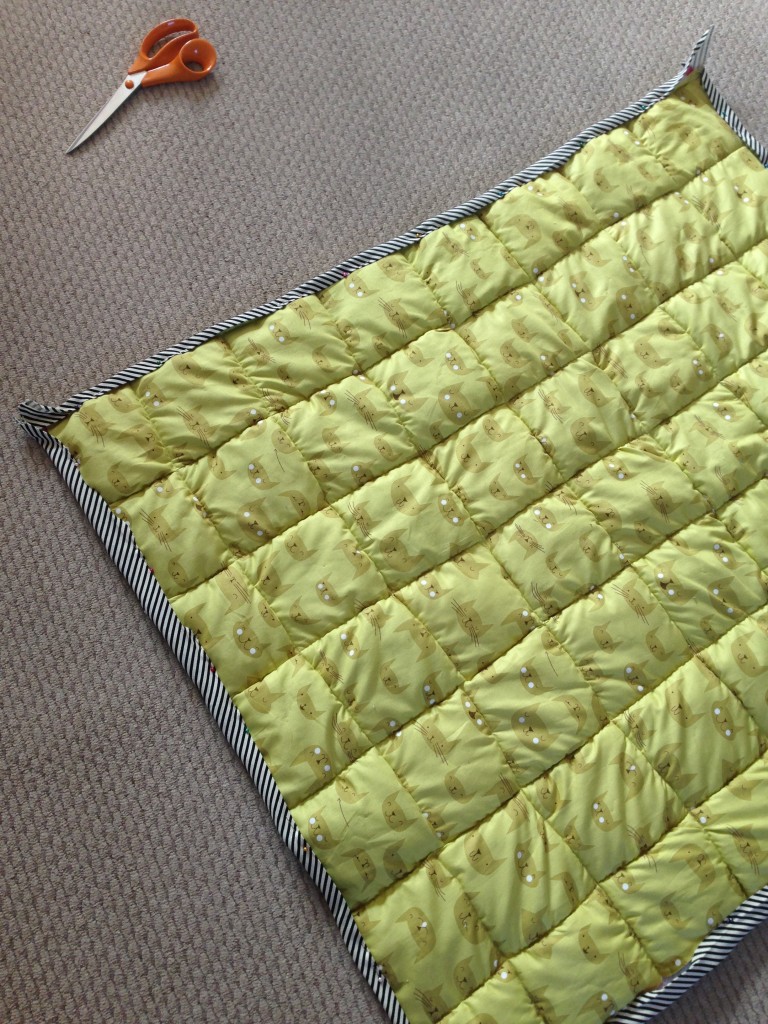 I must admit that I still don’t really know how to finish off corners…if anyone has any tips, they would be gratefully received! I’m pleased that I managed to make these ones look neat though. And I also made a label to mark the occasion for the bottom corner. 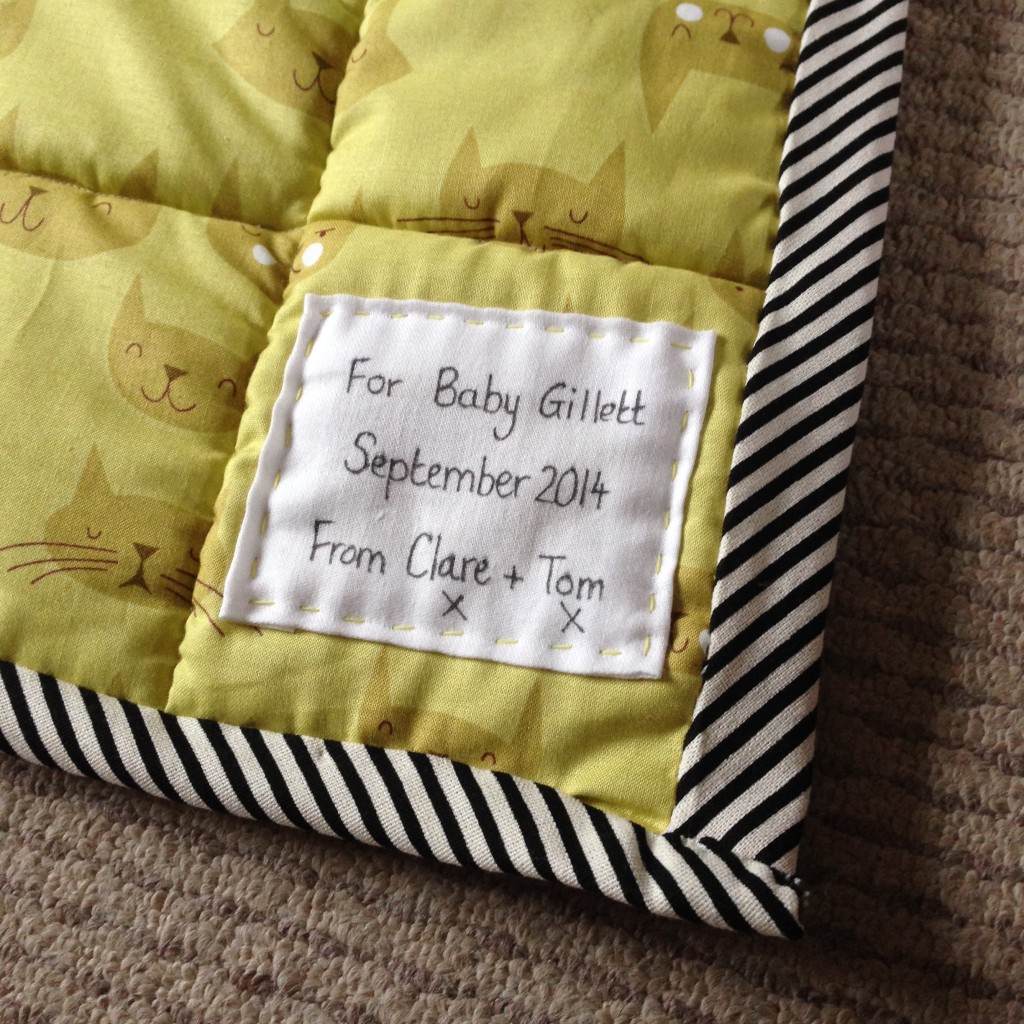 Hopefully Baby will be really happy playing on their mat, with as many friends as can fit on it! 🙂 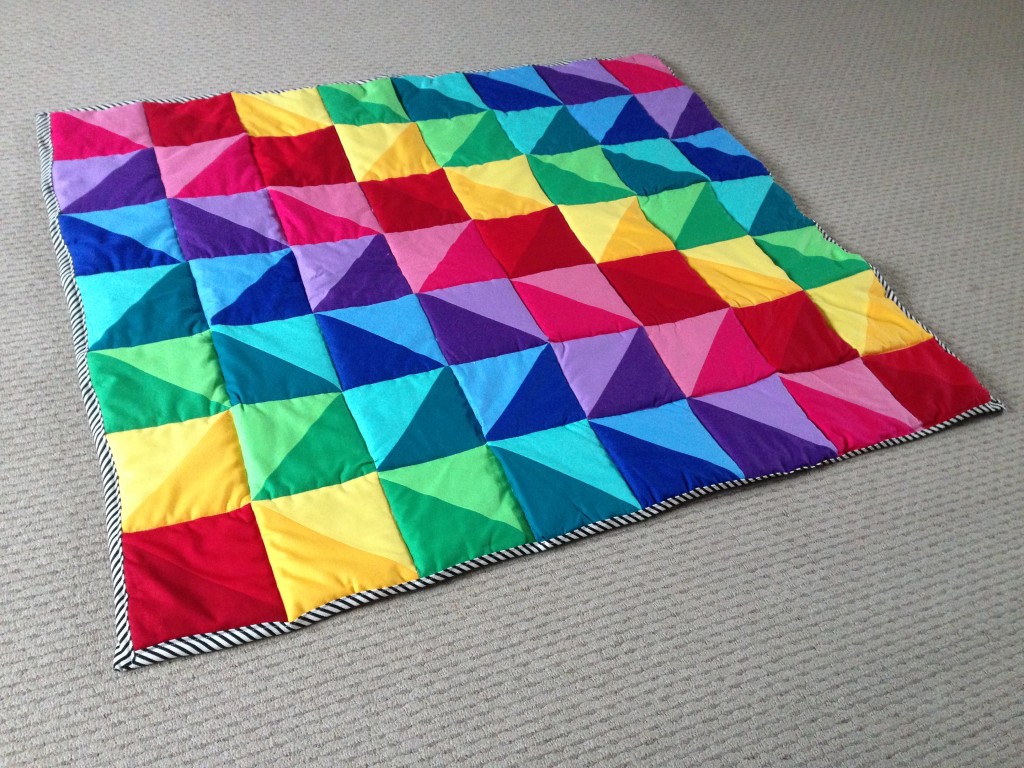 Thanks for subscribing to the Hello! Hooray! newsletter. I promise not to fill up your inbox with spam, just lovely things once a month!

You can unsubscribe at any time at the bottom of the email.

Something went wrong. Please check your entries and try again.