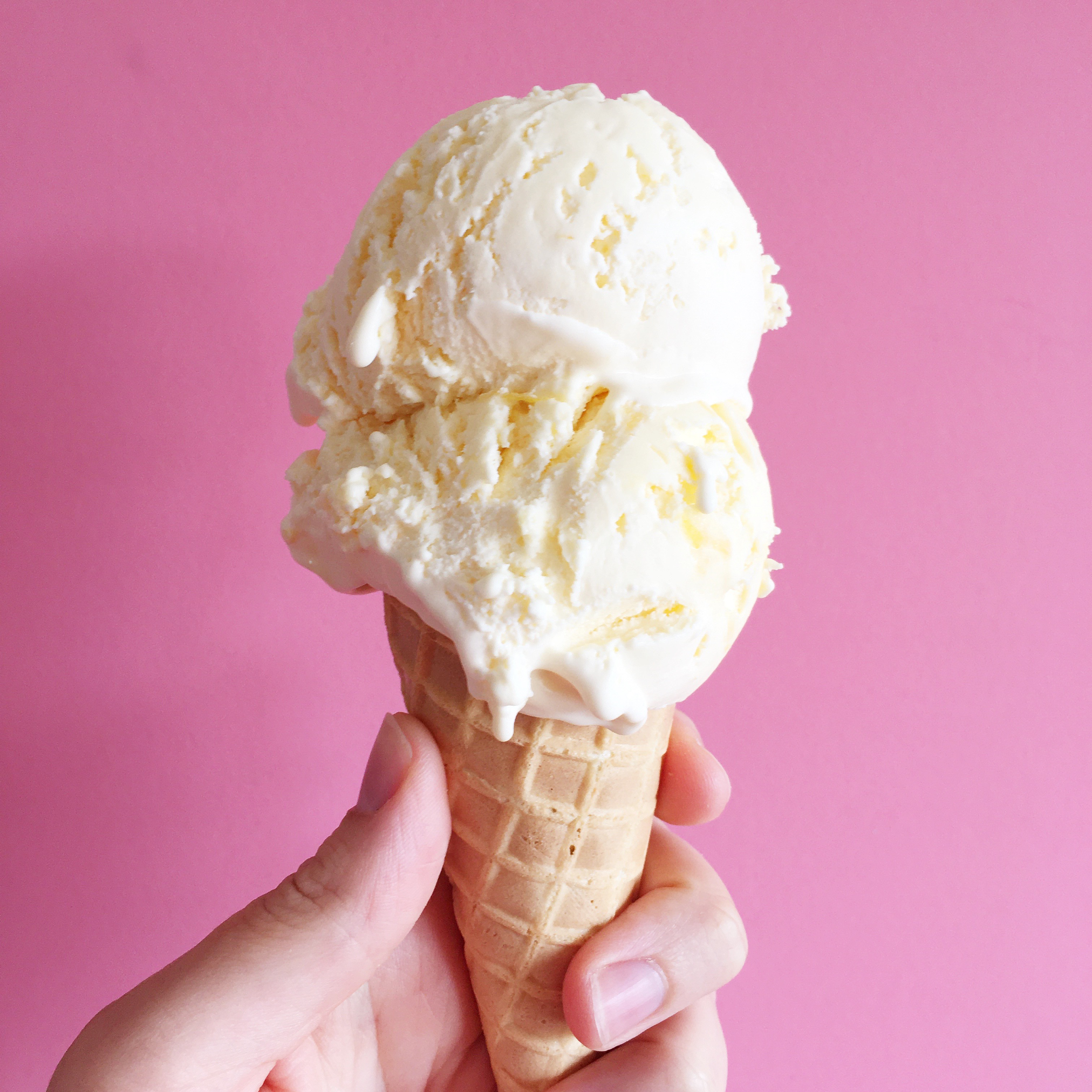 This delicious lemon curd ice cream recipe is based on a previously blogged recipe for the ultimate vanilla ice cream.  It’s the best recipe we’ve found, and I love to experiment with new flavour combinations because it’s THAT good. It’s creamy and fruity and just so good! I said in the original post that we bought a small ice cream maker as our third wedding anniversary present, and it is still going strong. In a few days time we will have been married for 7 years! So that little machine is doing well (and so are we!). We have an Andrew James machine that doesn’t seem to be available, but this is a very similar one (affiliate link).

At first glance it seems like this recipe is going to be a massive effort over 2 days, but in reality it is much easier. If you have room to keep the bowl in the freezer all the time so it’s ready to go when you need it, that will really speed things up! You’ll need lots of ice cubes ready too. It really is delicious, so well worth the wait overnight! If you don’t have an ice cream maker, the method to make it by hand is also given below.

Have lots of ice cubes at the ready

A jar of lemon curd – make your own with this recipe, and it tastes even better!

1. Put the canister from the machine into the freezer a day before you want to make the ice cream.

2. When you’re ready to begin, pour the cream and milk into a medium heavy-based pan, and add half of the sugar. Slit the vanilla pod down its length with a small sharp knife and scoop out as many of the tiny black seeds as you can into the cream mixture. Cut the pod into three and drop it into the pan. Alternatively, add 1 tsp of vanilla bean paste or a cap of vanilla extract.

3. Heat the cream and milk over a low heat, stirring occasionally, until it almost boils. It’s ready when you can see a few bubbles at the edge. Take off the heat and set aside for 30 minutes so the vanilla can infuse. Just let it cool a bit if you’re using vanilla bean paste.

4. Put the egg yolks into a bowl with the rest of the sugar and beat with an electric hand beater for about 2 minutes until the mixture has thickened. It should be paler in colour and falls in thick ribbons when you lift the beaters. Using a measuring jug, scoop out about 125ml/4fl oz of the cream mixture and beat into the egg yolks to slacken them. Reheat the cream until it just comes to the boil, take off the heat and stir in the egg yolk mixture.

5. Return the pan to a low heat and cook for 8-10 minutes, stirring all the time with a wooden spoon. The custard needs to be thick enough to coat the back of the spoon. Watch that it doesn’t boil – it should be ready as soon as you see any bubbles about to burst to the surface. At this point, take the pan off the heat so the mixture doesn’t curdle.

6. Pour the custard into a heatproof bowl, then sit it in a bigger bowl one third full of iced water to cool (this takes about 20 minutes). Stir occasionally to stop a skin forming. Put the bowl of custard in the fridge for 3-4 hours, preferably overnight, so it gets really cold.

7. Get the ice cream machine running (scooping out the vanilla pod pieces if you used pods), then stir in a tablespoon of lemon curd. Slowly pour in the cold custard into the machine. Leave it to churn for 10-30 minutes (depending on your machine). When it stops, it is probably too soft to eat, so spoon into a plastic container and stir in a few tablespoons of lemon curd. Mix it around, but leave some of it unmixed so that you can see it in the churned ice cream.

8. Cover with cling film, then a lid (we only used a lid), and freeze for a minimum of 3 hours. (It will keep in the freezer for 3 months but don’t take it out, then refreeze.) Remove from the freezer 10-15 minutes before serving.

To make it by hand

In step 1, heat the milk, vanilla, and half the sugar without the cream (the custard will be slightly thicker). At the start of step 6, whip the cream so it’s light and floppy, not too stiff, and fold it into the cold custard. Freeze for 3-4 hours, stirring once an hour until almost frozen, then freeze as above.

This recipe is original from the BBC Good Food website. 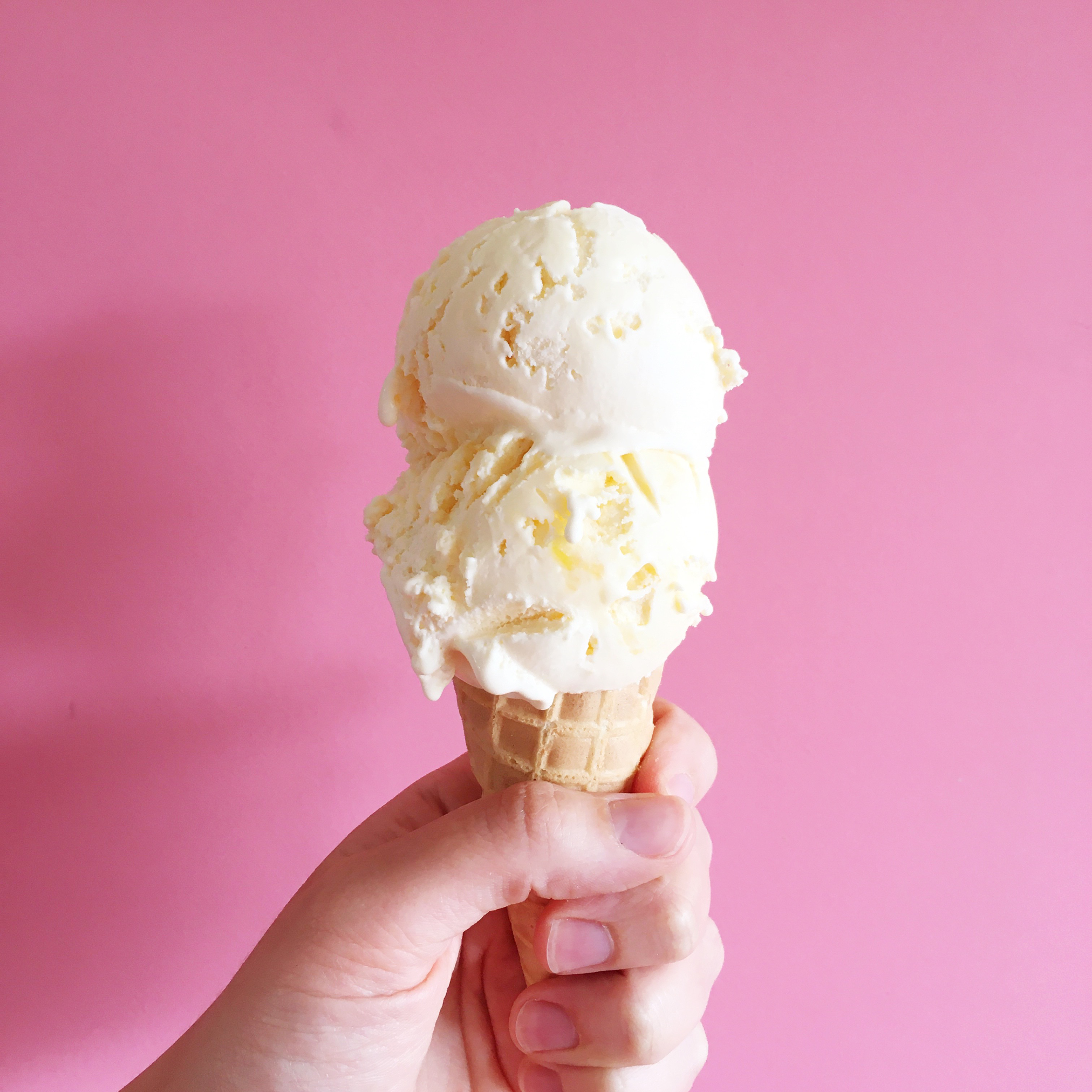 Serve in a cone and enjoy!

×
Scroll To Top
We use cookies to ensure that we give you the best experience on our website. If you continue to use this site we will assume that you are happy with it.OkNoPrivacy policy