Craft for the Soul

Pip Lincolne’s latest book, Craft for the Soul, came out in Australia earlier this year and having seen various snippets of it via Instagram and Pip’s blog I knew I’d have to read it! I spent a long time online trying to find out when the UK release date is, to no avail. Eventually I had the idea to search for it on eBay and I found an Australian seller who would post worldwide, and so I ordered my copy. A couple of weeks later (and thankfully with no additional import postage taxes, which I have been hit by before) my copy arrived, just in time for me to take it on my journey to Blogtacular. Yay! 🙂

You may be wondering why I am only just reviewing it now, given that Blogtacular was back in June! The main reason is that because it tied in so nicely with many of the themes at the conference, I actually just needed a bit of time with my thoughts to really think about it. Another is that I just had to read it again, as I enjoyed it SO much! My first reading of it took place on the train to London, and I read half the book on the way there and the rest on the way back (despite me having to get a super early train to be back at work on the Monday morning!). I really felt that I just had to read it again, and do some of the suggested activities and think about how they could help me.

The first message that Pip discusses it the concept of happiness. It was really interesting to read this – and she’s so right when she talks about how the pursuit of happiness has actually become some sort of anxiety in itself. One of my favourite quotes from this section goes like this:

“Happiness is something to celebrate. But don’t let it get in the way of you having a nice time.”

Focussing on the nice times can be helpful not only in appreciating the real happy times, but can also help to build a system to be able to cope with the not-so-nice times, which happen to us all. Don’t think that this book is all about the good stuff – Pip acknowledges that ‘life isn’t always peachy’ and I think that she’s got the balance between the two just right. I really appreciate Pip’s honesty in this book, as she discusses so many things that have happened to her as examples, both good and bad, but she emphasises a need to think about how you perceive these things to be able to move on (or not). And to think about how they might be encouraging or inhibiting creativity. 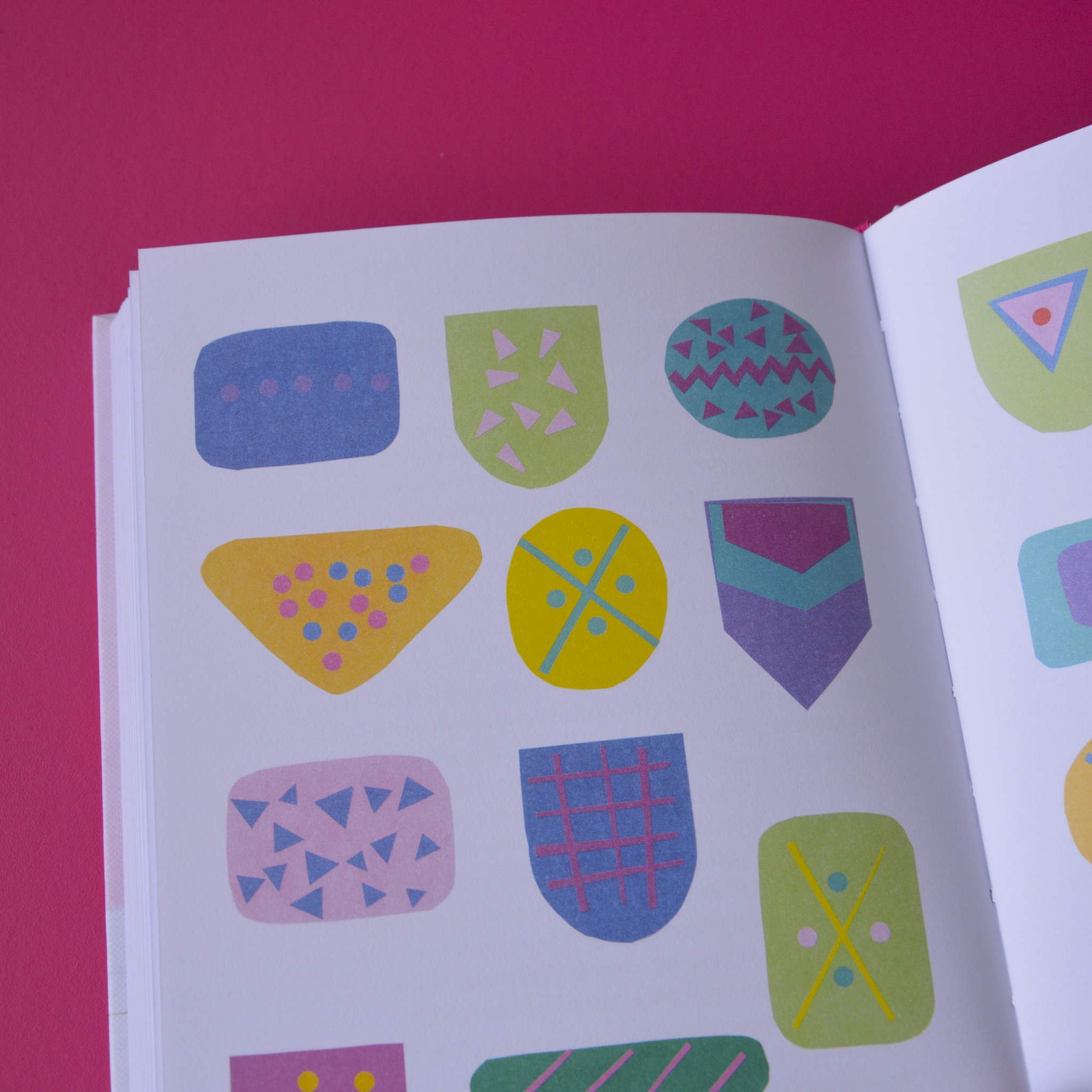 “Movement is the key to happiness and creativity.”

Over the first few chapters there are various activities to think about who you are and where you’re at in terms of the creative process and productivity. I really enjoyed the section about getting out and about – I know that this is something that helps me when I have creative block, but Pip talks about building a morning walk into her routine and the impact that has had on her physical and mental wellbeing. We have recently been getting off the bus a few stops early and walking the rest of the way to work, and I notice a big difference when we don’t! When I went out the other week to collect elderflower to make cordial, I had such a lovely walk at about 8am and that day I really noticed how much more productive I was. So I’m thinking about trying to do this more often on my craft days. It was good to have space to think, and I know that I’m really bad at taking downtime – I tend to only do it when I’m forced to through illness. I have this thing where I want to make the most of every minute of the weekend, but I should really appreciate that it’s ok to rest up! This is something that Pip refers to at various points in the book – I must remember to take it on board. 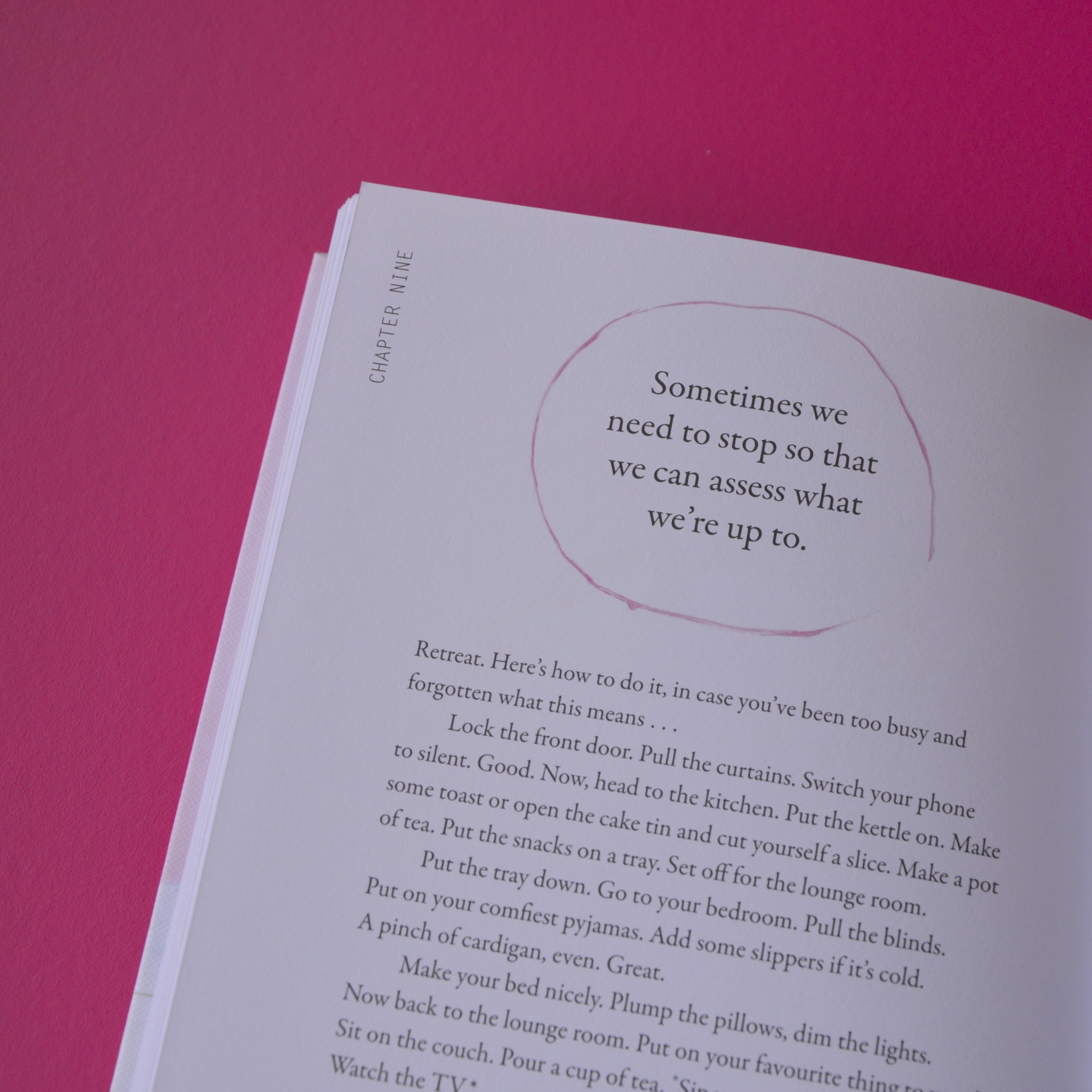 I’m currently working on some of the exercises from chapter 4: be yourself. These involve a little bit of reflecting and thinking about who I am and what my mission statement might be. I used to really hate self-reflection. It used to (and sometimes can still) feel like a bit of a ticky box exercise, usually for some sort of work-related development task that doesn’t mean a lot. But since reading this (and attending Blogtacular) I have felt different about it in terms of me personally. It’s great to be able to do it for me, for a purpose. Not in a ‘what can I do for your company?’ kind of way. 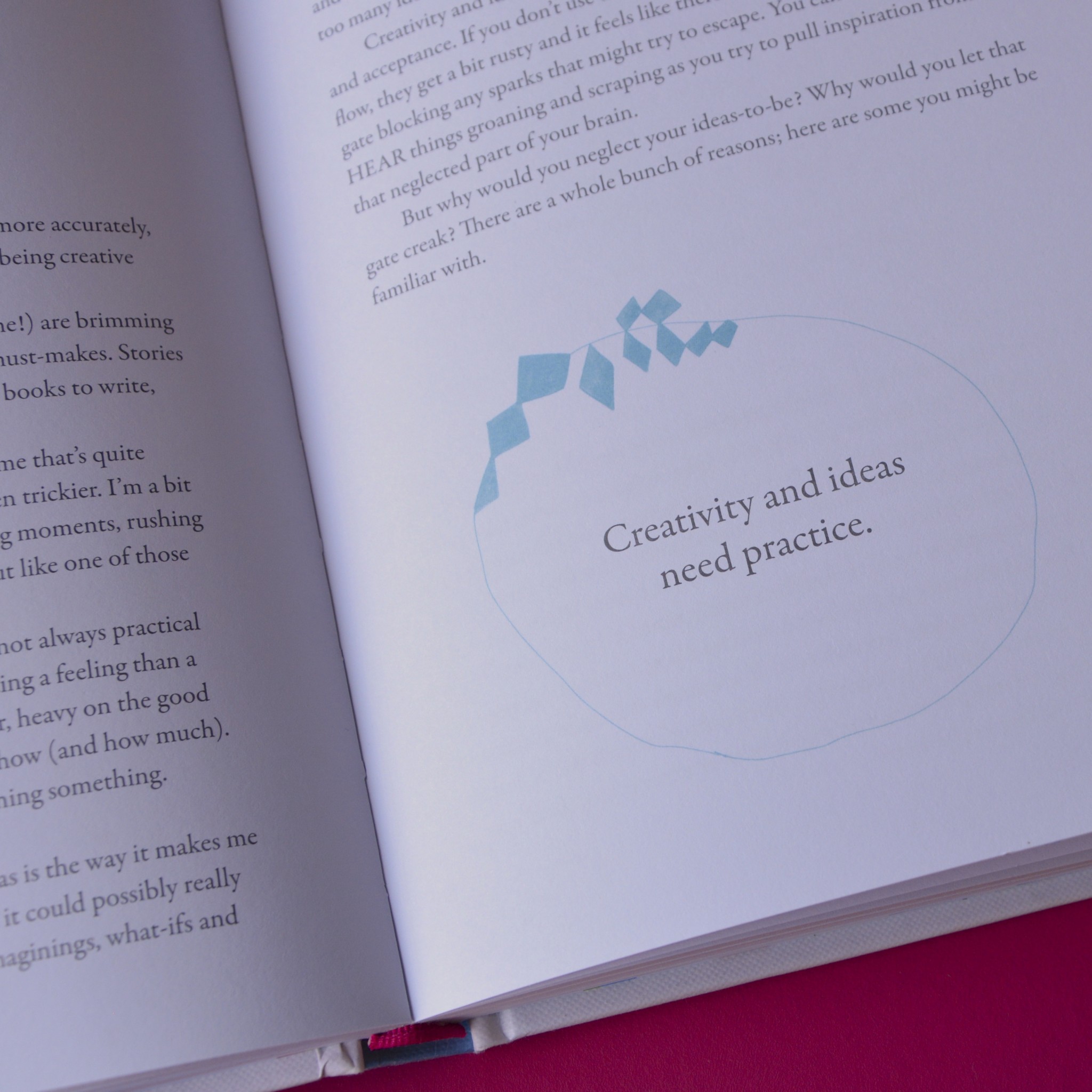 Once the basics of enjoying nice times and really knowing how to get the best out of your time are covered, the rest of the chapters discuss opportunities to get creative. Pip shares loads of ideas of how to do this – finding new skills, making with friends, making new friends and collaborating – and there is a whole section at the back with some super project ideas. I find myself yet again thinking that I must learn how to crochet to be able to make a gorgeous blanket like the one on the cover! 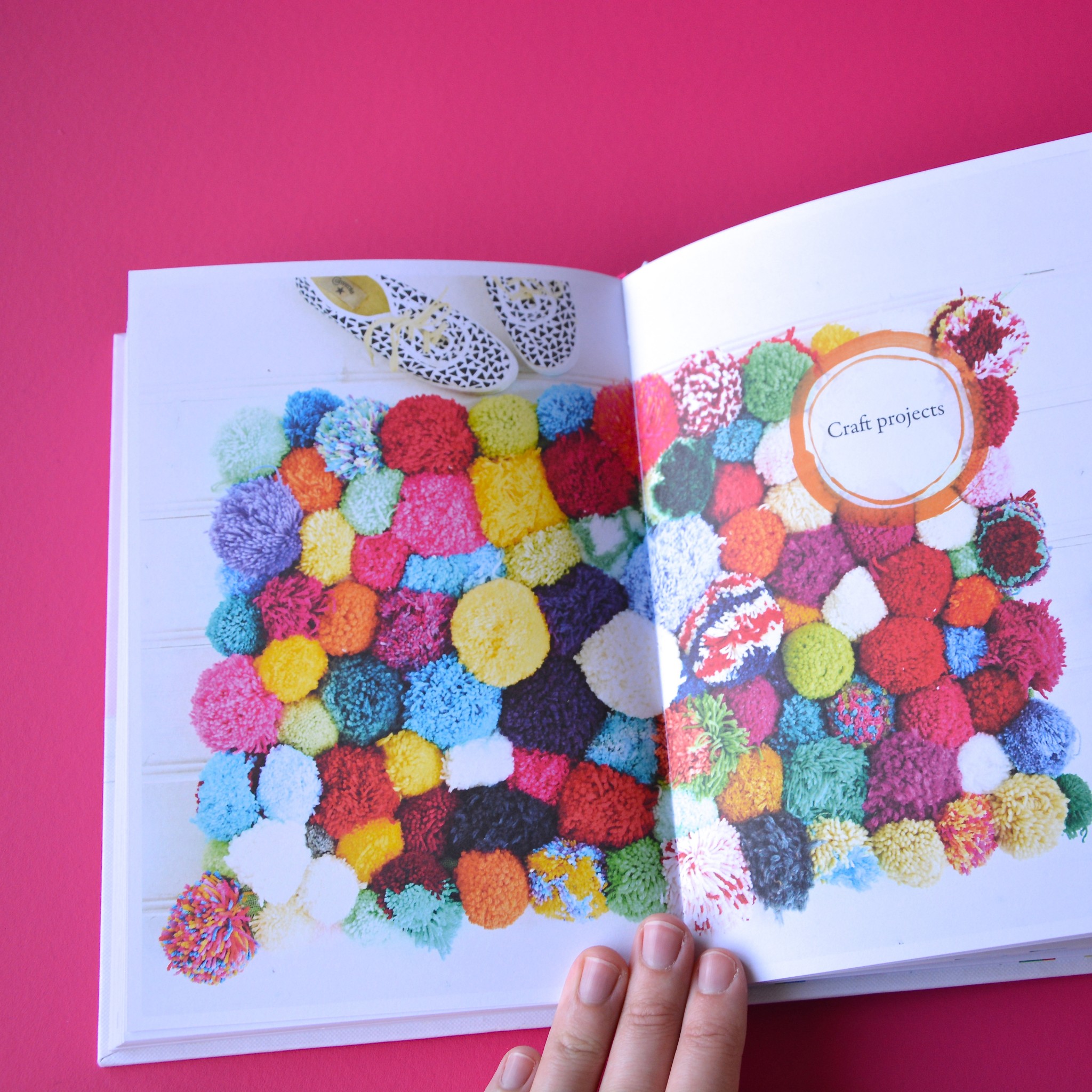 The styling and design of the book is lovely, and the quotes dotted about the book are thought-provoking and inspiring. This one by Sigmund Freud (see below) really resonated with me, having discovered my love of making things once I had left my music teaching career. It took me a long, long time to come to terms with leaving that job behind, but I would never have got into doing what I do now if I hadn’t. This was the toughest thing at the time, but now I realise it was a really good thing to go through. Pip talks about small-scale changes that you can make to enhance your creativity (you don’t have to have a career change!) and how to create new opportunities for creativity. The chapter about doing it with your friends and getting out there and just doing it are really inspiring. There’s a LOT to think about in this book, but reflecting is good! 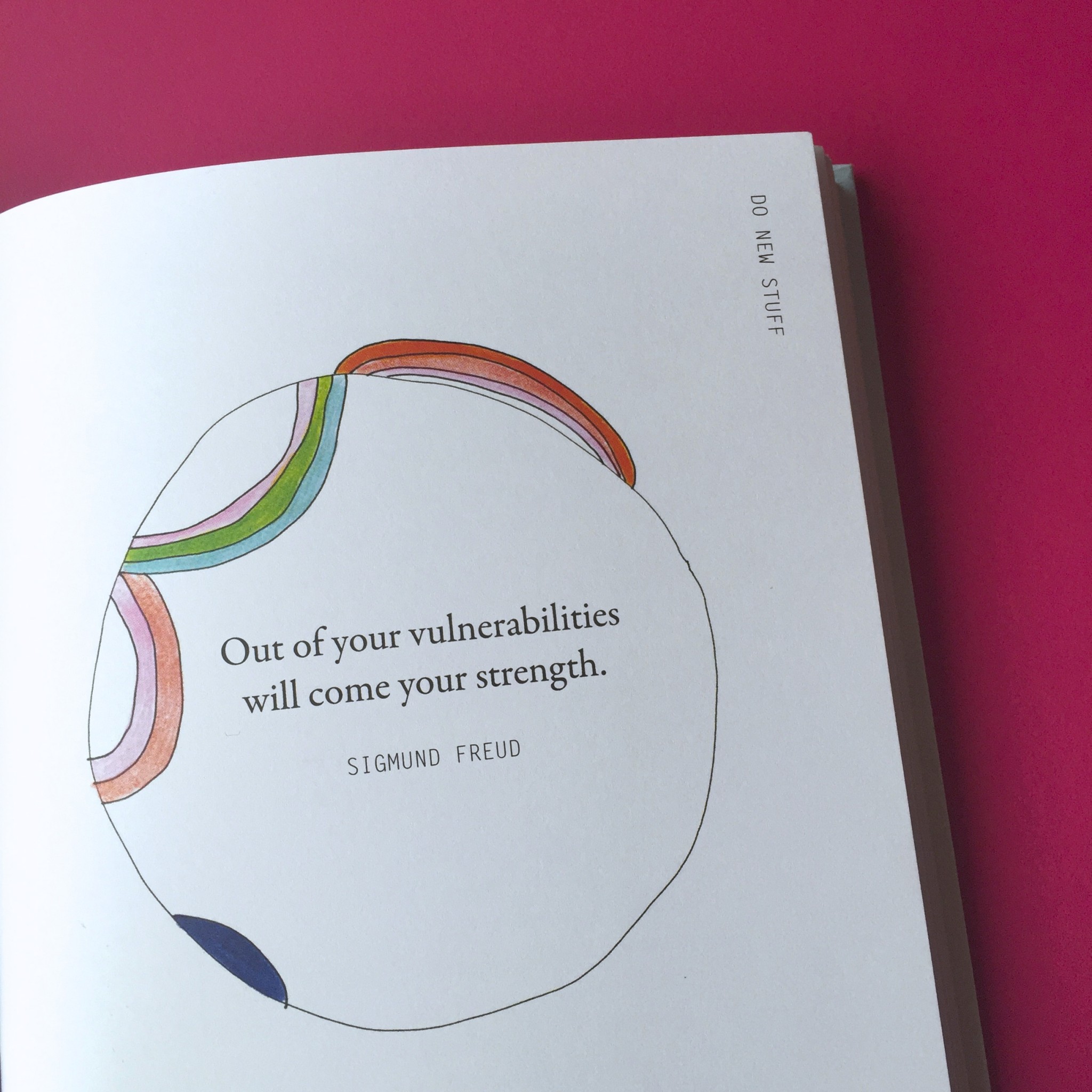 Each time I pick up this book, I take something new away from it. It’s not a book to read once and then let it gather dust on the shelf – it’s a book to be used, to be referred to, to share. A bit like creativity, really. It’s reassuring to know that the things I often feel are things that Pip often feels too! We have never met and we live on opposite sides of the planet, but (just as she does with her blog) she builds a connection through her book. To echo what Clare Bowditch says in the in the foreword, Pip builds a relationship with her readers as friends, and you feel like you know her a little better by the end. You feel like she might also know you too.

Craft for the Soul: how to get the most out of your creative life is published by Viking (part of Penguin Books Australia). At time of writing this post, I could not find out when this title will be released in the UK. I will update this if I find out – promise! 🙂